Have a look at this coin 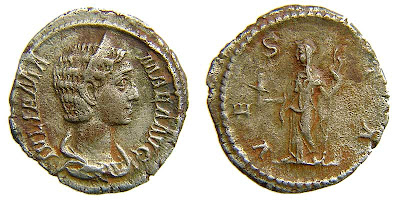 It’s a pleasant example of a relatively common denarius of Julia Mamaea, mother of Severus Alexander. It’s a bit porous and has a “desert patina". The coin without the “desert patina” would be attractive enough. The portrait is of good style and the reverse is also pleasing. What more could be said?

At least to me, the porosity and the red clay patina add another layer of interest. For me the porosity adds some character and interest to the coin, helping me appreciate its sheer age. (Julia is lookin’ good for being 1800 years old!) The red clay adds some highlights to the coin. On the reverse it helps bring to life the figure of Vesta. On the obverse it has an even bigger impact. The tiny bit of clay in the eyes animates the expression of the portrait. The coin just wouldn’t be as interesting to me without these random and natural enhancements. Julia Mamaea isn’t in my collecting area, but the coin had such eye appeal I had to have it.

One of the things I love about ancient coins is the variety. Even in the same issue of a coin you will find a ton of variations. Portraits can range from the sublime to the down right goofy. Minting errors, engraving errors, and the flaws in the flans also add other elements of interest.

So the title of this post was “Natural Beauty” what do I mean by that? Well, on top of the aforementioned minting process variations, the “man made” elements, coins are subjected to natural processes as well. Patina, the encrusting of dirt, leeching and crystallization are some of the processes that work on the coins over the centuries. They can have a profound effect on the appearance of the coin. They can make a run of the mill “Fel Temp” into a visually more interesting and beautiful, (or in some cases, entertaining) coin. Here is an example of a common Votive coin of Constantius II. 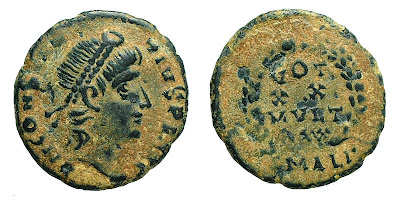 It’s a common enough issue and all indications point to a coin in nice condition under the dirt. It would clean up nicely and easily in just a short time. However I won’t clean it because, at least to me, it is more interesting the way it is. The earthen highlights on the portrait are appealing to me. I fear the coin just wouldn’t be as “pretty” if it were to be cleaned.

Those of us that enjoy ancient coins, do so for a multitude of reasons. For me it’s the history, and the connection to the past, but it is also the variety. Modern coins are massed produce and lack the “human touch” of ancient coins. Each ancient coin is a handmade piece of human endeavor and a work of art in its own right. Let Mother Nature work on the coin for a few centuries and you can end up with a true “Natural Beauty”. Thanks for reading.
Posted by Kevin at 9:10 PM No comments:

Provenance, Another Connection With The Past

Here is one of my favorite coins 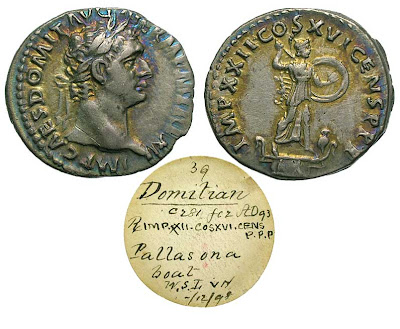 The coins is a beauty, I love the old cabinet toning. The reverse is especially nice, right down to the owl on the prow and Minerva’s gown flowing behind. All in all it is a very nice example of a relatively common ancient coin.

So what makes it so special to me? You guessed it, provenance! I value that old collector’s ticket nearly as much as the coins itself. It adds a whole new layer of flavor to my enjoyment of the coin. The coin comes from the William C. Boyd (1840-1906) Collection. Mr. Boyd was a London business man and avid collector. His interests weren't just in coins, but also included butterflies, moths, and Neolithic and Paleolithic stone implements. He was a collector’s collector! He was a member of the Royal Numismatic Society, and was it Treasurer at the time of his death. Mr. Boyd purchased this coin from W.S Lincoln in December of 1898. (W.S Lincoln operated a shop on Oxford St at the turn of the 20th century. He and his brother Edgar sold coins, stamps, coin cabinets and produced some numismatic references)

When we handle ancient coins, we cannot help but feel a connection to the past.
Who made it, who spent it, what was it spent on? We can imagine legionnaires, gladiators, and senators handling our coin, the mind boggles! However, when a coin has a recorded provenance, we know for certain who had the coin for a period of time. In my coins 1900+ year journey, I have no idea where it was until December 1898 when it magically appears from the past!

Now when I handle this coin, not only do I imagine legionnaires, gladiators and senators, I imagine Mr. Boyd. I can see him in his study, carefully filling out coin tags. I see him pulling trays from his coin cabinet and peering at a coin with a magnifying glass, struggling to make out a legend or other detail. I am the caretaker of a coin he was once caretaker of. The coin spent 1800 years getting to Mr. Boyd, and took a little over 100 years more to find its way to me. From a business man in 19th century London, to a lumber yard manager in 21st Century Michigan. As separated as we are through time, and location, we have this coin in common. Two collectors handling, studying and enjoying the same coin at different times in its journey. Of course I didn't know Mr. Boyd, but perhaps though this coin I can know him a little bit. How cool is that! Thanks for reading.
Posted by Kevin at 7:03 PM 3 comments:

The One That Started It All!

Welcome! I thought the best way to start my blog would be to share the coin that started me down the road of collecting ancient coins. Here is the coin that hooked me! 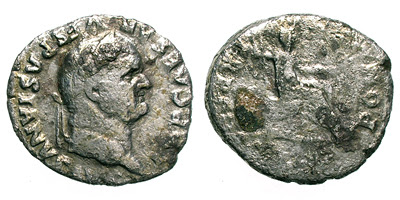 
Not much to look at. Pretty rough actually, can't even fully attribute it, (if you can, please e-mail me) What makes this coin so special is that I found it in my very first batch of uncleaned coins back in 2000. The entire lot was pretty rough, and didn't yield much. In fact I was pretty disapointed in the whole experience and probably would have gave up the hobby before I had really started. I decided to give this "zapping" thing a try. I built a simple zapper and hooked up the worst looking coins in the bunch. After a few minutes I could start to see details poking through the crust. Not believing that I could have anything worth much I hit the coin with a brass brush, then would zap it a few more minutes, and hit it with the brush again. The coin looked more grayish black than silver, until the last time I hit it with the brass brush. I saw the glint of silver and immediately regretted using the brass brush so vigorously! I soaked it in distilled water for a few days, then gave it a brief bath in lemon juice. You see the results!

Hindsight tell me that I could have done a much gentler job of cleaning, this little coin suffered greatly under my newbie fingers. However, had it not been for this one coin, I doubt I would have continued in the hobby. I kept the coin at my computer desk for several days just so I could gawk at it. I have much nicer coins in my collection now, but none mean as much to me as this little beauty! Thanks for reading!