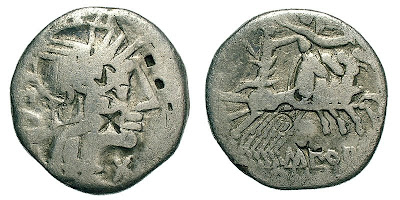 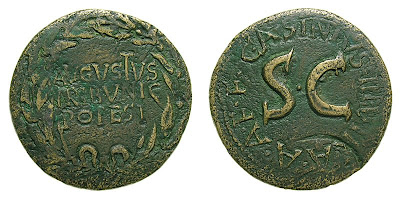 I purchased this coin about a year ago from Vcoin dealer York Coins. It is from the Willam C. Boyd Collection, unfortunately the collectors tag was missing. As far as I can see, this coin is unlisted in RIC. I did find another example on coin archives and it appears to be a die match. Here is a link to the Coin Archives entry http://tinyurl.com/38q24s Below is a picture of that coin. 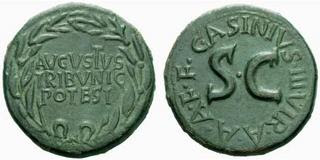 The coin was minted by C. Asinius Gallus for Augustus. He was one of three moneyers at that time, the other two were C. Cassius Celer, and C. Gallius Lupercus. The reverse legend of III VIR A A A F F is an abbreviation of tresviri aere argento auro flando feriundo which translate loosely as "three men for striking (and) casting bronze, silver (and) copper (coins)" The moneyers were part of the college of magistrates known as the Vigintisexviri which means “26 Men”

The Vigintiseviri was made up of six boards:
* The Tresviri Aere Argento Auro Flando Feriundo these were the three aforementioned moneyers
* Decemviri Stlitibus Iudicandis, a board of 10 men who judged lawsuits including those that dealt with whether a man was a free man or a slave
* The Tresviri Capitales, These three men handled the police functions of Rome. They ran the prisons and handle the execution of criminals
* The Praefecti Capuam Cumas The two Praefecti sent to Capua and Cumae in Campania to administer justice there.
* The Quattuorviri Viis In Urbe Purgandis, These four magistrates managed the road system in Rome
* The Duoviri Viis Extra Urbem Purgandis, these two magistrates handle road maintenance on the road system outside of Rome

So, here I am as an ancient Roman coin collector. I purchase a coin that catches my eye, a moneyers dupondius of Augustus. In researching my purchase I find that the coin is unlisted in RIC. So I hit the net and find another example that happens to appear to be a die match. Then I decide to learn about the name on the coin, C. Asisnius. (Gallus). I read through my limited reference library and research him on the net and learn about the
Vigintisexviri and the various boards it’s composed of. I also learn that C. Asinius Gallus was friend of Augustus, However, he was no friend of Tiberius, and went out of his way to make things difficult for Augustus’ successor. Finally weary of him Tiberius had him arrested. He died three years later while still in custody.

All of this from wanting to learn about one coin. It is one of the “fringe benefits” of collecting ancient coins. If we take the time to study our coins, it’s amazing what roads they will lead us down. When I first started collecting ancient Roman coins, I knew very little about the Roman Empire. As my collection expands, so does my knowledge of the Roman Empire, and the ancient world in general. They go hand in hand. Thanks for reading.
Posted by Kevin at 8:39 PM No comments: